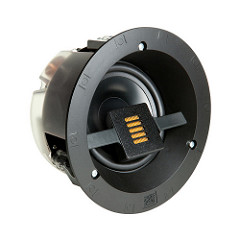 MartinLogan's exquisite Folded Motion tweeter boasts a radiating surface 8-times larger than a typical 1" dome tweeter. The Folded Motion Tweeter works by moving air (which creates sound) perpendicular to the folded ridges of the diaphragm, similar to how an accordion works.

A robust mounting-lock system allows quick, trouble-free installation. When not in use, the constant-control mounting locks are held securely within a self-contained housing. When moved into place during installation, they couple the speaker's chassis firmly to the ceiling. And if the speaker is ever removed, the locks retract and latch themselves back in their housings.

Installers rejoice as the Folded Motion tweeter is mounted at an angle, allowing the entire speaker to rotate to aim sound precisely where you want it.

MartinLogan's new architectural speakers feature ultra-low profile, paintable micro perforated grilles with no visible bezel for an near invisible integration into any wall or ceiling. A magnetic system secures grilles easily into place, reducing the risk of warping or damage during installation.

Carefully hand-built using only the finest polyester capacitors and air-core coils, the crossover employ's MartinLogan's proprietary Vojtko topology for vanishingly low distortion and seamless driver integration. This precision-tuned network preserves even the most microscopic sonic nuances while handling the full dynamics of any source.

The EM-IC is suitable for any application in average to small rooms. Ideal for use in a multi-channel home theater as a surround speaker, in a kitchen as 2-channel stereo speaker, or in a hallway as as part of a distributed audio system.

* Specifications are subject to change without notice.