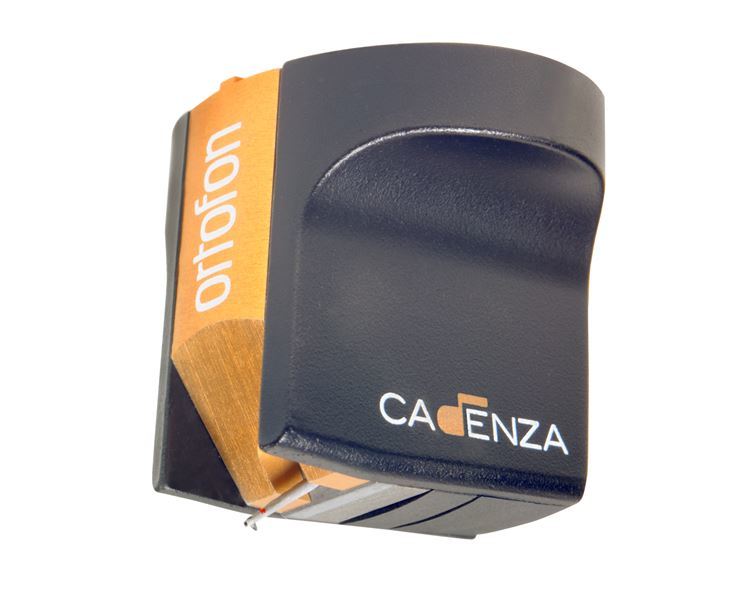 The Cadenza Bronze model is using a Replicant 100 stylus and a conical aluminium cantilever.
The coil wire is the famous Ortofon Aucurum wire, which is a gold plated 6NX copper wire.
Field Stabilizing Element/FSE, is used for optimal linearity especially during complex crescendo passages.
Cadenza Bronze stereo imaging capabilities illuminate the farthest corners of the soundstage in all three dimensions. 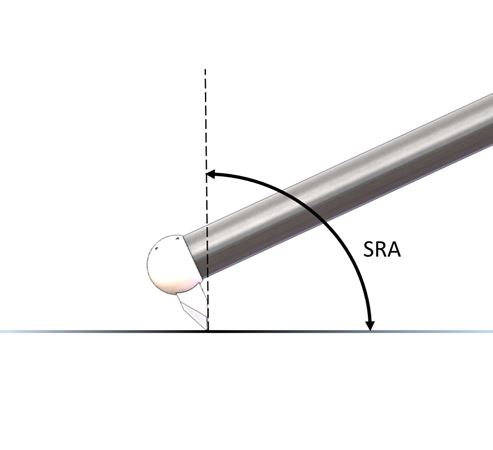 With a complex stylus shape like the Replicant 100, there must be special attention paid to positioning the diamond in the groove.

The Stylus Rake Angle (SRA - see figure) is very important to the performance of the Replicant 100 stylus, and the long contact surface (the sharp edge) of the diamond should be almost perpendicular to the record surface when viewed from the side.  The angle between the record surface and the cantilever is close to 23 degrees when SRA is 90 degrees.

A perfect starting point is to set the tonearm parallel to the record surface and to use the recommended tracking force. The contact surface will be close to perpendicular to the record surface with this setting. The SRA can now gradually and carefully be changed be adjusting VTF and, if necessary, the tonearm height. The target should be an SRA around 92 degrees, determined by the listening experience. In other words, the point of the stylus should point slightly towards the tonearm base.

At Ortofon we constantly look for new technology to be used in our products and push the performance of existing technology. Thus we assure the highest level of performance and quality. The Kontrapunkt models and MC Jubilee became market standards and are among our most popular cartridges. Nevertheless Ortofon decided to develope a new cartridge series that is even more ambitious.

By carefully implementing cobalt-iron pole pieces, new improved winding process on the armature, using extruded aluminium housing in the models as well as other changes, we have been able to reveal new possibilities in performing the analogue information. It was also decided to make a more complete range of cartridges, which meant an introduction of a moving coil Cadenza Mono model to support our customers, who have an extended interest in micro groove mono records.

Each of the five Cadenza Series cartridges has its own individual sonic expression, and all five models together represent the ensemble of five classic variations:

The story about Cadenza

Cadenza (from Italian: meaning cadence) refers to a portion of a concert in which the orchestra stops playing, leaving the soloist to play alone in free time, without a strict, regular pulse. A cadenza can be written or improvised. It’s usually the most elaborate and virtuosic part the solo instrument plays during the whole piece. At the end of the cadenza, the orchestra re-enters, and generally finishes off the movement.

During the 19th century, composers began to write cadenzas out in full. Others wrote cadenzas for works, where the composer had intended for the solo to be improvised, in order for the soloist to have a well formed solo that they could practice in advance. Some of these have become so widely played and sung that they are effectively a part of the standard repertoire.

...The Bronze certainly has the ability to extract all the fine detail contained in a recording, and excels at all the audiophile approved tasks. Performers are clearly defined, tonal balance is evenly reproduced, and dynamic contrasts are faithfully recreated. The touch of warmth that Ortofon have infused into the design, results in a cartridge with an easy going nature, which invites a person to listen for hours on end... "