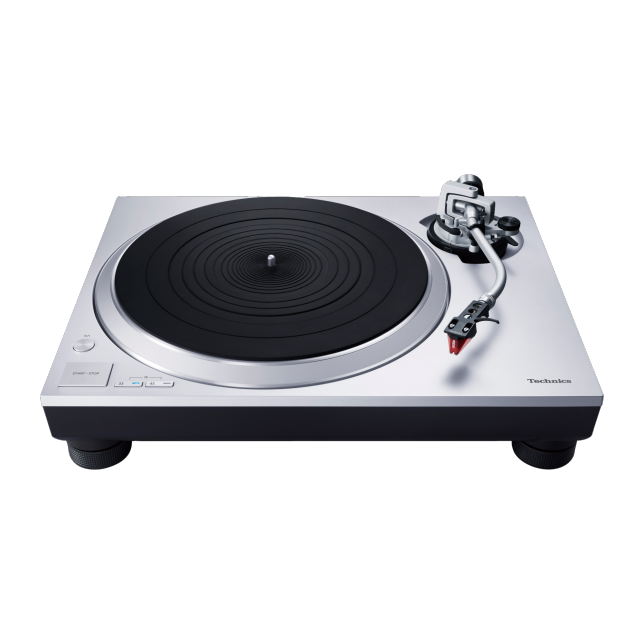 In store demo model available for your listening pleasure!

The technologies acquired through the development of the SL-1200 Series and the high-end SL-1000R model were lavishly inserted into the motor drive unit, a key part of the turntable. The motor exclusively tunes the single-rotor, coreless direct drive motor adopted by the SL-1200GR in order to read the high rotation accuracy and high-precision signals of the record. Optimal motor control is conducted for the inertial mass of the two-layer structure platter on which the vinyl record is placed with deadening rubber on the entire back surface to eliminate unwanted resonance in the aluminium die-cast platter to eliminate the rotation irregularity called cogging. The aluminium die-cast chassis is rigidly integrated with a special material consisting of ABS mixed with glass fiber to achieve a two-layer construction. The insulator is comprised of a spring and rubber to provide optimal vibration-damping characteristics. The tonearm is a static-balance universal S-shape tonearm, another Technics tradition. By adopting a high-precision bearing using the same gimbal suspension construction and machined housing as the SL-1200 Series, high initial sensitivity is achieved. In addition, reliability has been improved by incorporating a removable power cable and gold-plated terminals, which have less sound quality degradation, for the PHONO and LINE terminals.

Complete Turntable with a Built-in Phono Equalizer and Cartridge

Complete Turntable with a Built-in Phono Equalizer and Cartridge In order to enjoy playing analogue records more comfortably, the SL-1500C features a built-in phono equalizer and bundled cartridge. There is no need to separately prepare either one, making it easy to link with a wide range of audio equipment. The shield structure of the built-in phono equalizer suppresses the effects of external noise and noise from the power supply. It is also equipped with a switch to turn the LINE output off when it is not being used. The turntable has been designed to thoroughly shut-out adverse effects to the PHONO output. The dedicated power supply for the PHONO output terminal is isolated from the power supply for the LINE output terminal, and has been designed to prioritize sound quality by minimising the wiring of the PHONO signal. The isolated terminals also prevent wiring mistakes. An Ortofon 2M RED cartridge, which is highly acclaimed as an MM cartridge, has been selected for the bundled cartridge. Combining this high-quality cartridge with the performance of the SL-1500C will maximise the sound quality of vinyl records.

The SL-1500C sports a simple design without unnecessary frills, while retaining the superb operating feel that is a Technics tradition. The attractive appearance lets you enjoy playing records to your heart’s content.